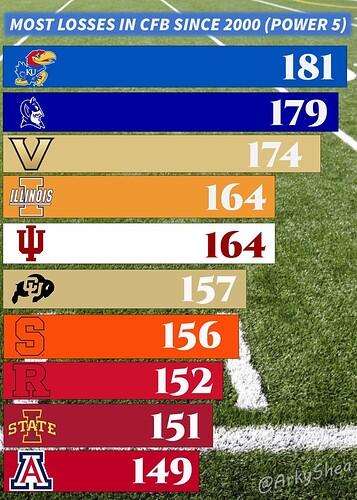 Well if the B12 adds Arizona & Colorado they will have 4 of those 10. I guess maybe success doesn’t matter as much as the name.

We should have helped add another one to Illinois

The question is will the bottom dwellers be ok being bottom dwellers when it’s todays top 20. That been my point all along. Unless there is something to level the field or a relegation system I don’t see LSU or Such being ok with year over year losing records. It basically means asking perineal winners to be happy becoming perineal losers and tk be happy about it and keep donating buying tickets and watching

The almighty dollar drives everything sports included. All sports have one thing in common. Their product that generates all revenue is “competition “. Pro sports get it , with salary caps, draft picks , etc. There has to be parity or their product(competition) suffers. What happens when your product is damaged? Less people will watch or attend, thus networks lose viewerships, which in turn affects their revenue stream. The shortsightedness greed of the big boys is destroying college sports.
Being a big sports fan, I love my university and all its successes and failures, but I be damned if I’ll be a participant of watching 20 or so teams gobbling up all the talent and screwing the rest of us. Killing their product gives me hope that they’ll all crash and burn then maybe they’ll be a resurgence of what college sports should all be about.

Lol. I get your point about the bottom dwellers. We disagree. It’ll be more than 30 schools, it will be over a decade from now, etc, etc.

I was just pointing out that ninernoize said the more things change the more they stay the same.

I hope my main point came across. Don’t know how many teams will be in the super league but being a lifelong capitalist, it’s just Econ 101. My experience tells me the market may be the final judge. Sure the big boy’s greed is the power structure now but if revenues dry up what are they gonna do?

I agree. It seems like the formula they use to calculate market value only looks at the number of fans in a certain market who currently watch games & doesn’t take into account the viewers that will be lost when the teams in those markets are no longer playing regional rivals. Sure lots of people tuned in to watch UCLA play Arizona or Stanford but how many will tune in to watch UCLA vs Illinois or Maryland. I think they are really underestimating how far out on an island USC & UCLA are going to be & how that could affect fan interest. I don’t think Texas & OU will be as big of a deal in the SEC but the B10 is really reaching out there. It may work fine but I selfishly hope it fails miserably. 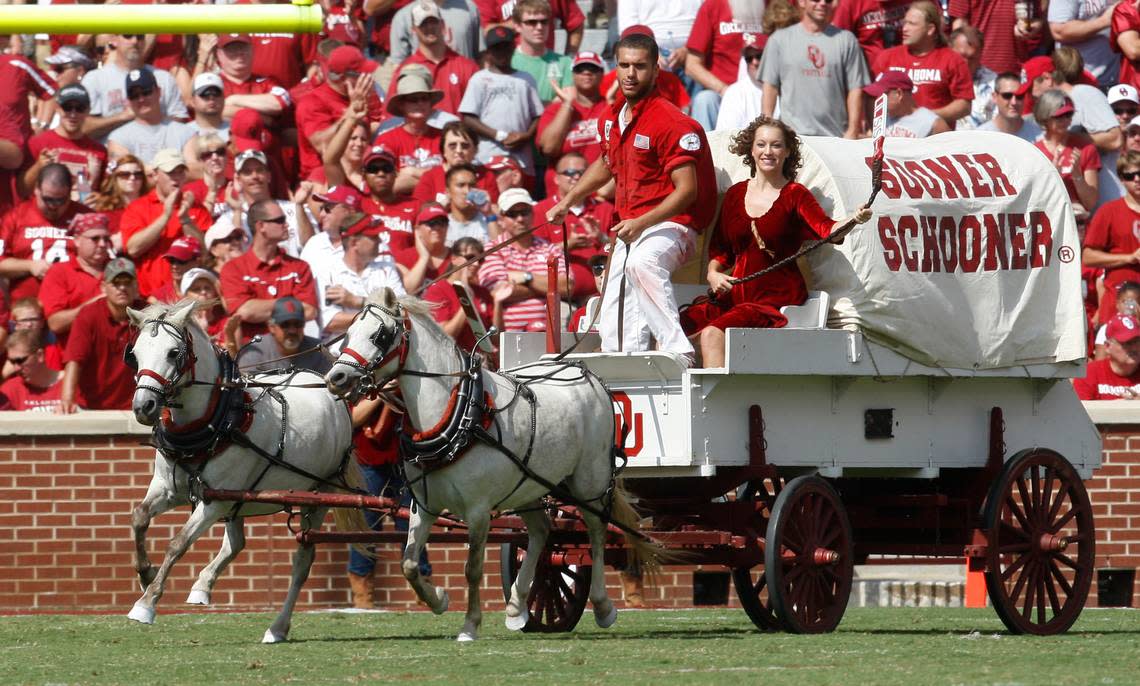 ‘It changed the world.’ How a 1984 Supreme Court decision still shapes...

“College football, I think, is in terrible trouble.” Andy Coats fought — and won — a 1984 Supreme Court case that gave college football television freedom. Now, it may lead to its demise.

This is what we want, the best case scenario is that the loser between CBS and NBC gets involved with the Big XII

If Fox, NBC, and CBS all have broadcast deals with the Big 10 that makes me wonder who is going to bid on the Big 12 rights? The Big 12 burned some bridges with ESPN last year when Texas & Oklahoma announced they are leaving.

I would expect the PAC 12 to come to a deal with ESPN now because ESPN has the late night time slots to broadcast PAC 12 games. I’m not huge ESPN fan but there is no doubt ESPN is hype machine which could benefit the AAC and now ESPN has more time slots to fill with AAC content. I could see the AAC getting regular exposure playing on Thursday nights.

Ughh Thursday night. I hope not. 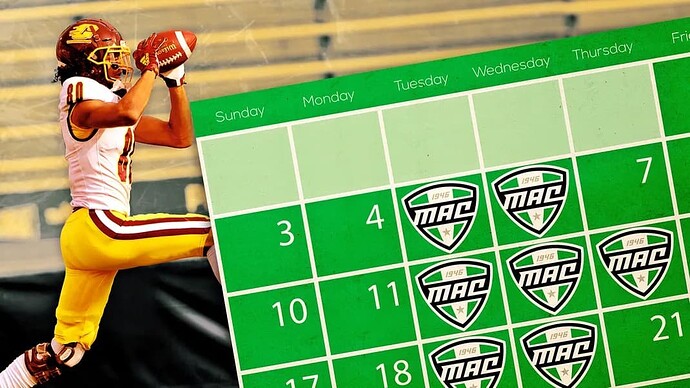 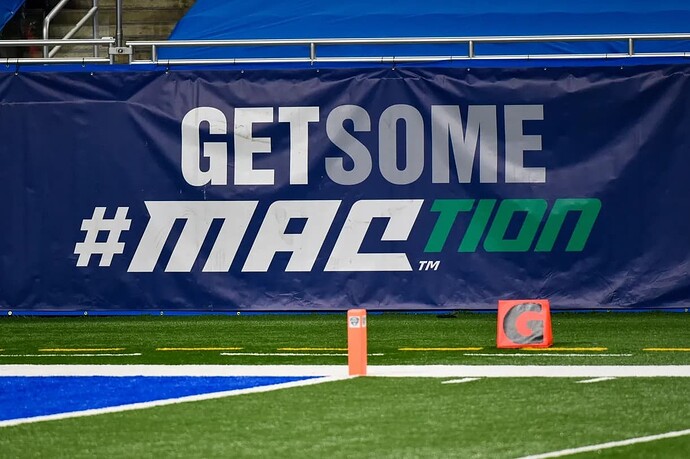 Depends on how extensive the CBS and NBC package is for B10. Can’t imagine Fox is giving up much to them.

I do think Thursday games are going to be a reality.

Yeah Thursday’s suck. I like Friday night games though

On Thursday night you might be the only college game being played in the country. The students will likely show out because it is on a school night and it would be a big event. Friday night goes up against high school football, date nights, and other end of the week activities. The MAC plays on Tuesdays and Wednesday in the freezing cold which is not the same. You aren’t going to play every game on Thursday maybe one a season.