I knew Dubois was rotten to the core, or likely just doesn’t care. But this is beyond measure. What an insult to programs who do things right and win some. He has no idea. 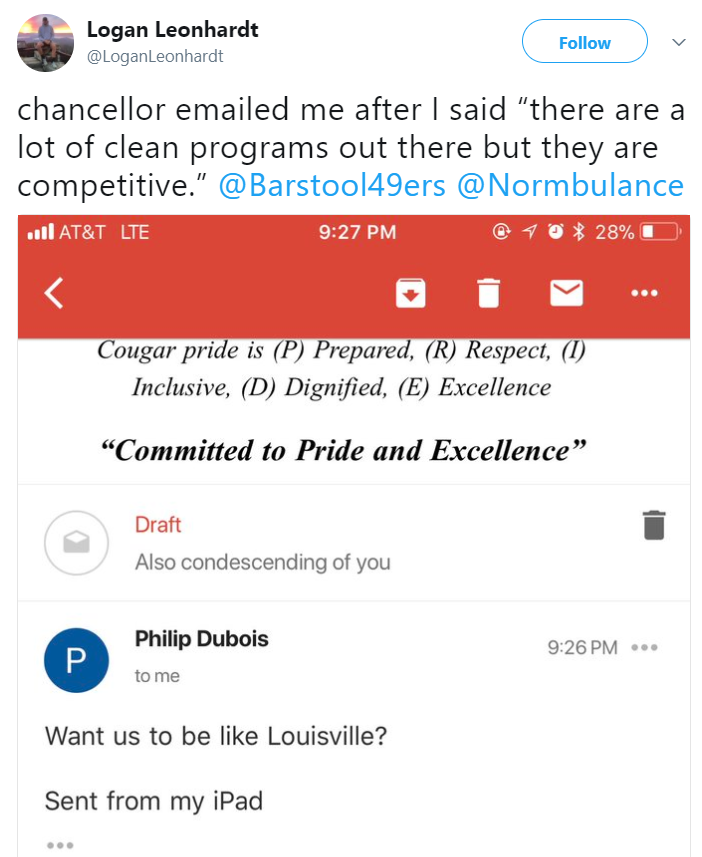 I’ll simply wish we were like VCU at this point. Pretty snarky or totally stupid.

He needs to get a clue real quick. We don’t want to be “Louisville”, but we sure as heck need to start winning more with a chip on our shoulder.

The reality of it is…no, I do not want to be like Louisville. I also don’t necessarily want nor do I expect us to do what it takes to be a Top 10 program.

Whatever we did or were doing that got us to CUSA 1.0 and got us to the dance in 8 out of 11 seasons…let’s do that again.

I don’t care if we win national championships…I just want to be relevant. We were relevant for a decade…why can’t we do that again?

Is that really too much to ask Mr Dubois?

I wish we were in the ACC, our basketball team won a recent national championship, and one of our football players won the Heisman. Not to mention collecting multimillion TV checks every year.

The irony is… CHP could have just as easily referenced the fake classes in chapel hill, but I doubt he ever does that.

Louisville just fires their MBB HC and their AD. I’d kill to wake up to that reality applied to Charlotte.

Louisville just fires their MBB HC and their AD. I’d kill to wake up to that reality applied to Charlotte.

Dude, I bet Louisville and Chapel Cheat would say “being dirty never felt so good.”

[quote=“itsbraille49, post:7, topic:31222”]Louisville just fires their MBB HC and their AD. I’d kill to wake up to that reality applied to Charlotte.[/quote] Yes. That would have been the appropriate reply to “Want us to to be like Louisville ?”.

You could have told him you want to be like any of the 225 or so schools that have gone to the NCAA tournament since we last went. Take that list and remove the 10 or so dirty programs and say we want to be like these.