There’s speculation because of the QB battle at Alabama and Tua leaving that his younger brother Taulia could look to transfer to be with family where Tua is drafted. This article speculates should the panthers take Tua. 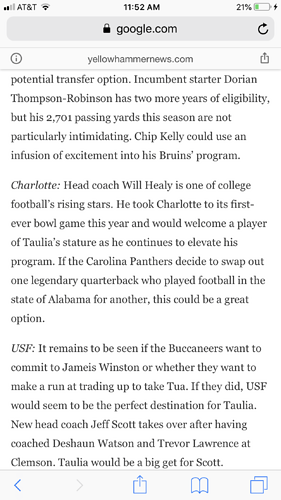 Can you link the article please? I would like to see what the context is behind it.

'Ohana': Tua Tagovailoa is leaving Tuscaloosa but what about Taulia? -...

With the departure of Tua, and the logjam at the quarterback position, could Taulia Tagovailoa seek playing time at another school?

I like Reynolds but competition and playing the best player is how it goes. Reynolds has 2 more years. How many years would Taulia have after sitting a year?

Hopefully the kid does what’s right for him though and not just following where his brother and family goes.

Works pretty well then because we don’t need a new qb next year. Don’t need one the year after, but Reynolds may graduate by then and could be a grad transfer risk anyway.

If Reynolds has a good year next year, I don’t think it’s likely he transfers. That would be a lot of risk, new coach, new system, new competition, new players.

And the whole premise of that article is that he would follow Tua to whatever city drafts him…so the article is only mentioning us as a landing spot for him if…and only if…the Panthers select Tua in the draft.

Not sure how possible that is either.

clt has the panthers drafting OL

Tank next year for Lawrence and his hair

Not a fan of panthers drafting tuae but if that means his brother transfers here, then I’m fine with it or that doesn’t happened and we
can get drake maye…