Make plans to be here.

We owe these assholes a trip to the woodshed. GREENVILLE, N.C. – For the second time in four weeks, ECU's Jayden Gardner has been named the American Athletic Conference Freshman-of-the-Week, the league announced

I have a ticket available if anyone has a need.

I hadn’t previously seen this thread before posting my own Charlotte/ECU thread, so I’ll repost this here:

If we get what we expect from Sanchez during his time here and ECU gets what they expect from Joe Dooley during his time there, this game will be the beginning of a future meaningful, in-state, mid-major rivalry. Dooley’s history says he’ll bring them back from the cellar just like Sanchez is expected, and Looking at recruiting, the classes for next season are closely ranked.

For this game, the odds makers seem to have it about even as to who will win. Here’s to Sanchez going 1-0 in his first game against Dooley and ECU! 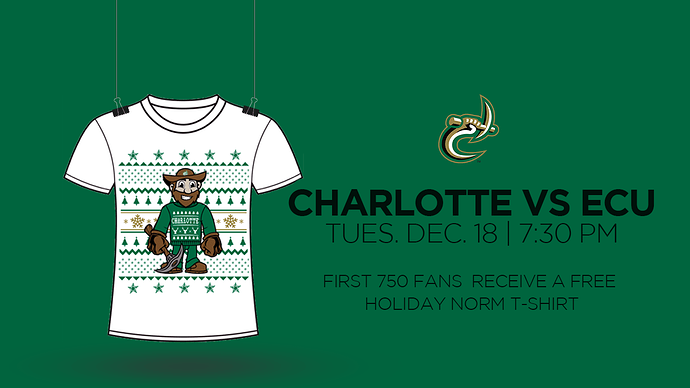 The East Carolina basketball team is in the midst of an extended break. The Pirates downed visiting Maryland Eastern Shore, 70-47, on Dec. 2 and won’t return to action until taking on host Charlotte on Dec.18. “Obviously, we had exams mixed in this... Any online streaming options for those of us who don’t have Bein Sports??

I think as long as you have a subscription with any major cable company, you have access to Bein Sports and can watch the game. It will just make you log in with your cable tv credentials.

I just gave that a try, and it said that Bein wasn’t part of my subscription.

hmm I’m not sure. I can’t remember if it worked for me the last time I checked…I think it did. I have Time Warner/Spectrum.

Could do the Sling free trial and add the sport pack (5.00).

Love any victory over ECU

surprised this board isn’t lighting up!
we beat easy-u!

I think the biggest key tonight was our guys were fresh for once.

I have been turning the heat on McGill, but I need to give him credit, he played well tonight.

Love to see some life in Halton again. At the end of the game, some pirates and niners got into it in my section. Many would clutch the pearls and cry, but damn it’s nice to see a game people care about, even if this game was for RPI spot #300

A regional conference isn’t the way to go, but I love these regional out of conference hoops games. I hope in the future we schedule less longwoods and more App, Winthrop, and ECU if we’re gonna play RPI anchors.

Glad we won. Ecu isn’t good this year so losing would hurt worse than winning feels great. You can see Sanchez and assistants coaching hard the whole game. Can’t wait to see what type of recruits Sanchez has coming in to try to mold.

We really like using the whole entire shot clock. Several times per game the players even check to make sure the shot clock buzzer works.

On to TCU which will be a tough matchup. Hopefully we can fire on all cylinders against a good team.

Did we hire a football coach?