2019 Football: A Season to Remember

Sure, this was not the way we wanted to end the season, but there are way more positives than negatives, and we took a big step forward this year. Going to hash out my thoughts below, and probably add to them as more things come to mind. This is a chance to get past the sting of the way we ended it by remembering that we had a winning season: a first in the history of our program.

Here’s to a healthy offseason, good team GPA, a February class with some big linemen. To 2020.

Absolutely an incredible year. My wife likes to say all it took for Niners football to be successful was for me to move to the opposite corner of the country. Indeed I took one for the team, and you’re welcome!

Making a bowl game gives you exposure to millions. So many more people know who Charlotte football is

Great year. Graduated in 1980. Thought I would never see us in a bowl game.

I’ll be over to help you pack tomorrow.

It’s funny to think back to how I felt when we were 2-5. Incredible turn around, first bowl game, and a winning season at 7-6. So much to look forward to next year!

We talked to Lemay’s and Highsmith’s parents. They said both have received combine invites. Lemay’s dad mentioned that they have already been contacted by 28 NFL teams.

Also talked to Cam’s dad. Cam walked up, took off his jersey and gave it to his dad. Dad was pretty emotional!

Delayed in Nassau and at CLT for more than 3 hours. And we still had a group of fans waiting in the cold — and after midnight — to welcome us back home. Means more than you’ll ever know. THANK YOU, @UNCCDean and everyone who came out! We have #GOLDstandard fans! 💚🤙 https://t.co/j9V5u02E3j
UnclePugsly December 21, 2019, 9:00pm #13

Would be nice to be in a conference that understands television and revenue.

On the plane ride back from The Bahamas today the steward thanked all the 49ers fans and half the plane started clapping. From Wednesday thru Friday we were everywhere down there and the spirit, passion, and camaraderie was off the charts.

I stayed at The Atlantis and there wasn’t a bar, restaurant, beach, or Casino outing where I don’t run into many other Niners that were like me wearing Green every day. They had a stand with Bahamas Bowl gear at Atlantis on Thursday, it was sold out of Niner L and XL T-shirts by 12:30.

The pre-game tailgate was over capacity and we drank it dry of beer (luckily was just the one for road beer that I had to sub wine in). The enthusiasm was great, and this coming from someone who grew up in SEC country.

We just outside the stadium trying to finish off beverages someone told us we could carry in NASCAR style (falsely but the nice Bahaman security let us and other Niners walking up not let it go to waste) and could hear the Forty-Niners chant outside the stadium. Despite the outcome I can’t think of anyone that made the trip that didn’t have the fandom reinvigorated.

I can only imagine how crazy it would have got had we won.

I got back to room and saw all the buzz in the city, watch parties that were overflowing, the city illuminated green, local media all tuned in, we owned the region for day.

Now we missed an opportunity with all those eyes on us to have a great on the field performance, but people have to be getting woke to what our football program can be with its resources and potential fan-base.

This season was a W, but hopefully the feelings we had this bowl week will pale in comparison to our first drive-able bowl game. My fingers are crossed it’s next year.

I’ll echo what ChiDave said, going to the Bahamas was an awesome experience! Next time I hope more of you can attend. It is an experience I will remember and cherish forever.

The tailgate party exceeded my expectations!! Could not believe the attendance and excitement in that place. It was the best Niner party I have ever been to. Big tent, Bahamian band, free food and plenty of friends whether you had met them before or not. The Alumni association did a great job and are to be thanked for footing the bill on the event (except for alcohol).

I was on the same plane back and Chris Reynolds walked through. I was able to shake his hand and tell him how proud we were of him and the team.

Looking forward to another opportunity to do this again, for an even better season next year and a Bowl win. 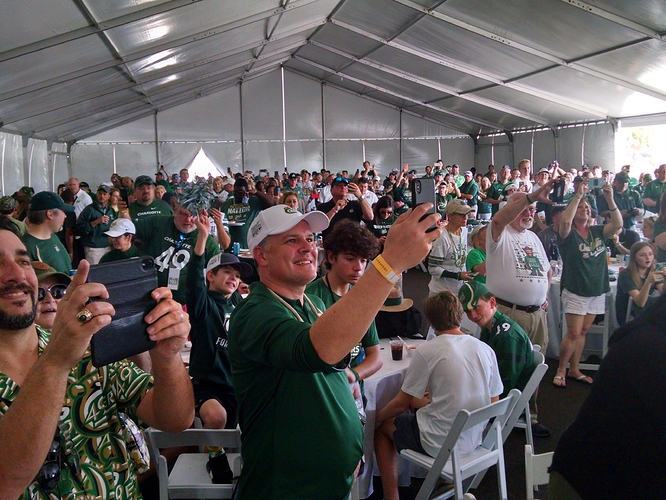