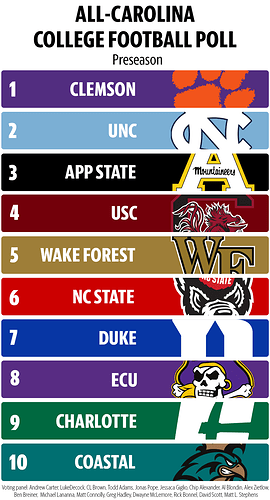 If only we had hired Houston we would be 8th

Heck no. That would be so much fun.

I think the only out of whack one is ECU ahead of us (5-7 seem to be a crapshoot, so their order seems fine). After we take out 2, 3, and 7, we should shoot right up the board, though. 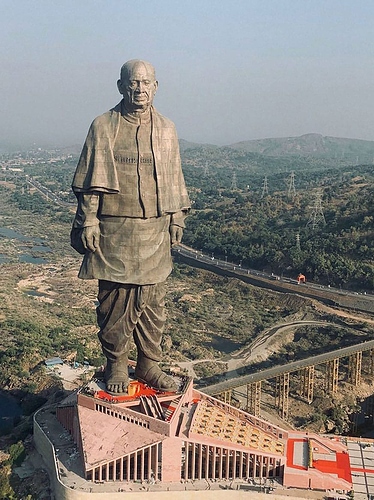 This is what happens when the ranked 2-0 Niners return to the Rich for a beatdown on a small belt opponent right?

I’m not even sure how much of a drop-off that league would be in terms of competition. Aside from losing FSU in football, isnt it just exchanging one set of “other” schools for a more localized set?

That said, if something like this were to happen SC would probably be the toughest to convince. They like talking about how big their pond is, even if they are constantly getting eaten up in it.

I did forget about UVA. Whoops. 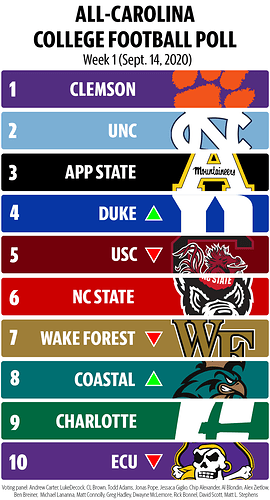 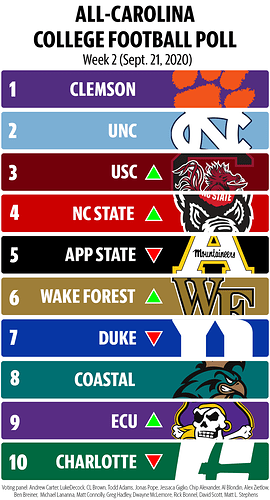 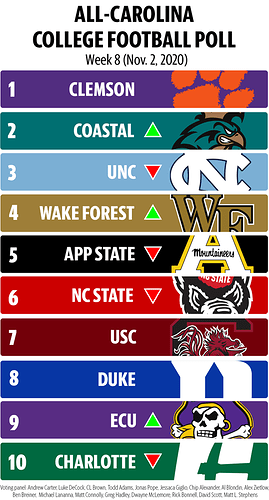 These losses have consequences. If you would have told me perception dropped us below ECU a week ago, I’d have barfed.

Can’t really argue with that poll.

ECU has gotten better as year has gone - we have stayed about the same. We have had some glimpses of improvement only to regress. Lots of questions right now about scheme and health of some key players. Next year is huge. This year was pretty much a wash regardless with pandemic impacting everything.

What I think:
Reynolds is hurt - I can’t decide if this is making Carney’s play calling look bad - BUT we still have had some questionable calls, even taking into account Chris perhaps playing hurt.
Defensive scheme isn’t working and needs to move to a more traditional alignment.
Healy needs to hire someone - a coordinator, an AHC or maybe just an advisor that has some FBS experience.
This season feels like Healy’s third at AP. After going 8-4, 7-1 in conference he followed that up with a 5-6, 3-4 record. He mentioned last season that following up success was more difficult that he anticipated.

What we do know:
Some of the play calling defies explanation. Backward pass to OL, where they have to catch the ball, turn, run and avoid/power through tackles for 4-5 yards?
Rotation of players, substitutions and ball distribution aren’t making much sense.
We still have a talent gap after years of Lambert.
Our recruiting continues to improve.