Add to it if I’m missing something.

Thanks for doing this, I know a lot of outside people wondering this information. Now, if we can get a tally on who all is going where, bc I want to go to the place with the most fans lol jk. I plan on checking out Noda to provide support to the official watch party and then work my way to Belfast/DNG.

The Greensboro one might be just Tristian and I, but we are both solid, so that’s ok.

The brewery in Pineville (Middle James). I thinking about going there since I live right around the corner.

I saw this as well on their Facebook page and will probably swing by there as I live in the Ballentyne area as well.

Clayton + 2 are headed to Picasso’s because this might be the last niner game I ever get to watch there, and they have been great to us over the years.

Is Pic’s closing? Are you dying? What is the story here?

I have been told pics is closing

I hate to hear that. Pic’s has beaten the odds by a ton over the years. The original location was somewhere near one of the big hospitals (Kings Dr area?). I went for games, but don’t remember the location well. They got pushed out for hospital expansion, so they moved to East Blvd which was a great building with lousy parking. Then they built condos and retail next door, and parking got worse. Pic’s survived though, and the University location has been home to many great events when we didn’t suck. Don and Maryjane turned it over to their son Donnie years ago, and I guess he still runs it? Don opened DB’s Tavern in Ballantyne and they have hosted some 49er events. If Pic’s closes, maybe DB’s becomes the newest home bar for our teams.

Another one. Harvey’s Cornelius 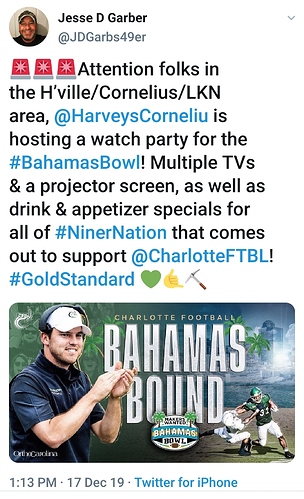 Wasn’t there a Pics Uptown where the current Ink n Ivy is?

Yeah, Grey’s Tavern isn’t all official and doesn’t have cool graphics and Drink specials and such, but it will likely be the only watch party going that will have in attendance a 16 lb gold bowling ball that attended the Marshall game (albeit in guest services).

FWIW I was told 2 years ago they were closing due to rent going up because of light rail - it hasn’t happened yet. Maybe it’s just the end of the lease. I hadn’t heard anything recently though.

Yes one there, one in east, one around the lake and the OG Pics was on Kings. DBs is basically a Pics too.

Tintin, Will Grey’s have the audio from the game on or do they usually have music in the background?

Normally music, but at that time of day they will def throw the audio on for yall

I’ll ask Grey. I can’t see them being to busy on Friday at two, so I think we are fine.