It is unofficially Charles Hayward Day. 17 years since the 49er passed away. I always thought it would be nice to put up a Wiki entry for those with the skills and time to do such things. RIP Survivor. For those newer Niners, links below.

An athlete's legacy is generally measured by championships, statistics, and jaw dropping plays that will be remembered by fans for a lifetime. Charles

Coach Bobby Lutz sometimes wonders if his players at North Carolina Charlotte have grown up too fast.Every time they enter Halton Arena they see hanging on a wall the freshly retired jersey of...

BASKETBALL; Player Dies of Leukemia at 21

Charles Hayward, basketball player at North Carolina-Charlotte, dies after two-year fight with leukemia; he was 21 (S) Fifteen years ago, today, Charlotte mourned the loss of one of its most inspirational figures: Charles Hayward

The world is a little bleaker this morning.
Charles Hayward is no longer with us, and that isn’t fair. No 21-year-old man should die of leukemia. No family should have to go through what the Haywards have. No university should have to plan a campus memorial service for one of its athletes.

But life has claws and they tear at our hearts this morning as we remember Charles Hayward – a quiet, dignified soul who once had the possibility of becoming one of the best basketball players in UNC Charlotte history.

It is fitting that Hayward’s memorial service Wednesday will be held at UNCC’s home arena. Hayward’s love for his sport was uncomplicated – he felt most at home in a gym.

Hayward was always comfortable thinking of himself as an athlete, ever since he first dunked a basketball in the fifth grade in Louisiana. He was never comfortable being known purely as ``the player with leukemia.’’

All Charles wanted to do was play ball,'' said Galen Young, a teammate of Hayward's at UNCC.That was his thing.’’

A willowy 6-foot-8 forward, Hayward had long arms that gave him the reach of a 7-footer. He didn’t bat away every shot that came down the lane, but he sure scared off a lot of them.

Hayward in the air, long arms reaching toward the sky, was a block waiting to happen.

While his leukemia was in remission, Hayward started three times last season. He blocked six shots in one game.

Charles played in just 10 games,'' Young said.But he had so many blocks that it took (center) Kelvin Price almost all season to catch him for the team lead.’’

Hayward was a basketball star growing up in Alexandria, La. His coach, Charles Smith, had him play center, because Smith didn’t have anyone else as tall as Hayward. But Smith also allowed him to step out and shoot three-pointers, and the coach watched in awe when Hayward sometimes outran the guards on the fastbreak.

``He could do anything,’’ Smith said once.

Hayward was following the path of his older brother Eric in high school. Eric became a fine role player for Connecticut. His specialty was drawing charges; he took 43 of them in three seasons.

Eric tried to take charge No. 44 for his younger brother. When Charles had a relapse and desperately needed a successful bone-marrow transplant, Eric became the donor. That was in April.

Charles Hayward’s mother, Janice Harrell, was with her son almost every day for the past two years. Once Charles was diagnosed with leukemia in October 1997, she quickly moved from Louisiana to North Carolina to stay with him. Eric came, too.

When Charles wasn’t in the hospital, the three of them shared two rooms at a motel near the UNCC campus. The family went to Chapel Hill for the bone-marrow transplant in April.

Charles Hayward never got to come back to Charlotte.

He moved out of the Chapel Hill hospital into a nearby apartment briefly, but had to return to the hospital when his body started rejecting his brother’s bone marrow.

Six days ago, UNCC athletics director Judy Rose came across some notes she had made eight months before – a ``crisis plan’’ that specified all of the ways the university would try to help the Haywards if Charles died.

``Thank goodness we’ve never needed to use this,’’ Rose thought to herself.

The next day, Rose was told Hayward probably wouldn’t live through the weekend.

Hayward had already told his relatives he didn’t want to be placed on a life-support system if it came to that. He slipped out of consciousness Saturday and died Sunday night at 10:45.

It is difficult now, with the death so fresh and the pain so intense.

But when we remember Charles, we shouldn’t remember needles or chemotherapy.

We should remember him in full leap – as the player who tried to block every shot and swatted away leukemia as many times as he could.

Let us think of him the way he would want us to.

Soaring up into the sky, one last time.

Nice post NewNiner. It is hard to believe it has been 17 years. Charles would be older than many posters here.

I remember being in business class at Charlotte when I heard he passed. I started tearing up. Reading this article after so many years caused me to tear up again.

He died about the time of Bobby Phills, Dale Earnhardt. Sports Illustrated wrote an article that Charlotte had tragic losses in sports with both of these guys dying, plus the mother of Rae Carruth’s baby he had killed. I wrote them a letter to the editor saying they forgot one, Charles Hayward.

A day or two after the issue with my letter came out, I got a call from a sportswriter at the small town in LA, that Hayward is from, who wanted to ask me some questions about me remembering Hayward. He wrote an article that I had not forgotten Hayward. I was kind of embarassed that he was writing an article about me remembering Hayward because I was just trying to help SI not forget, but I answered all of the man’s questions. He sent me a copy of the article he wrote, & I think I saved the SI article & my letter to the editor, but I’m not sure where they are.

[quote=“stonecoldken, post:6, topic:30521”]He died about the time of Bobby Phills, Dale Earnhardt. Sports Illustrated wrote an article that Charlotte had tragic losses in sports with both of these guys dying, plus the mother of Rae Carruth’s baby he had killed. I wrote them a letter to the editor saying they forgot one, Charles Hayward.

A day or two after the issue with my letter came out, I got a call from a sportswriter at the small town in LA, that Hayward is from, who wanted to ask me some questions about me remembering Hayward. He wrote an article that I had not forgotten Hayward. I was kind of embarassed that he was writing an article about me remembering Hayward because I was just trying to help SI not forget, but I answered all of the man’s questions. He sent me a copy of the article he wrote, & I think I saved the SI article & my letter to the editor, but I’m not sure where they are.[/quote]

I remember seeing that in SI… Was very happy not only that you sent it in, but they published it. As terribly sad story. As is my tradition, I’m bumping this thread on Charles Hayward day. 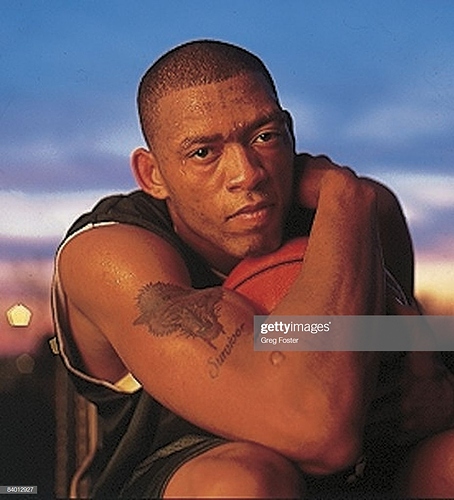 Thanks NSNN for helping us remember someone who can be an inspiration to all of us. It’s sad that we did not get to see him reach his potential on the court. Proud that he chose to be a Niner.

To be the oldest in the family and watch your little brother suffer and you can’t do anything is a very frustrating and a hurtful feeling and it haunts you. I bury Jr 241 months ago that’s 20 years and 1 month. I appreciate you guys celebrating Charles Hayward day for him, I visit him this past Wednesday on his birthday to ask for strength. So thank you all from the Hayward and Harrell family.

He was a great kid!

He was a great young man and taken far too soon. Prayers for you Eric and your family. 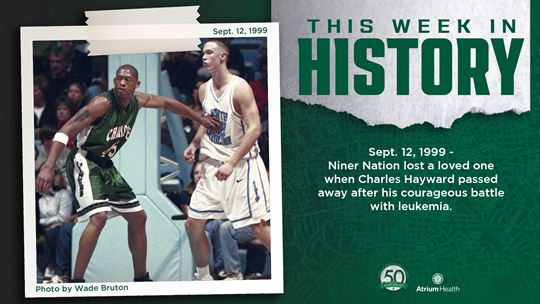 I can’t believe that Charles would be 42 years old. Let’s see, that makes me…oh hell!

Such a sad and courageous story…but man, what could have been.
I am glad his name will be forever remembered…but I hate it’s for the disease and the story. In my opinion, had he remained healthy, he STILL would have been remembered here anyway. He would have been an all-time Niner with his name all over the record books if not for the Leukemia. I truly believe that.

A long time family friend and fellow Niner fan was fighting cancer around the same time Charles Hayward was. I’ll never forget him talking about his struggle and saying something along the lines of “if Charles Hayward can fight his cancer, then I’ll fight it too.” They died about the same time, but it was clear that Mr. Hayward had touched a lot of other people through his strength and perseverance. RIP to them both.

Another year passes. Hope @uconnhuskies45 has a nice day, today.

If you’re replying don’t be afraid of your age most of us are in our forties some late thirties. Just think of it as an honor to still be here to tell the story. For most of you, Charles birthday is October 23 and our mom’s is September 4 which is 8 days before his passing, my little brother’s is October 22. It’s been 21 years, before his passing I use to love the movie Dying Young, which were one of my favorite movies at the time. I haven’t watched the movie since my brother were sick and passed. It is a very emotional movie and now after going through it myself, I understand the real pain. I can’t tell anyone why a love one must die but my brother stay in the hospital were painful. Even I couldn’t take just looking at the test and procedures the ran on him while he was awake, but through all that my brother always kept a smile on his face. If you came to visit him, you always left feeling lifted because he didn’t like anything negative in the room with him.
I’m sorry about the other person that went through the same thing and didn’t make it. My heart go out to their family because I know that their going through the same thing that I’m going through.
To all you Niners, you are my family also because you are my brother family always.
Eric Hayward
P.S. Thank you guys for keeping my brother memory alive.