I thought going into the season we had a bowl caliber squad… yesterday showed me our offense and defense (as long as the long- untouched runs were a blip) are plenty good enough to make a bowl a reality… BUT… and it’s a huge but… Special teams play are a massive concern… AGAIN.

We had a 99 yard KO return vs GW for a TD. 1st game jitters? Ok, I can accept that… but it was still way too many guys missing assignments.

App was a disaster.

We can’t continue to be the lesser of 2 teams in Special Teams. It’s a 3rd of the game and it’s not a stretch to says App’s dominating that portion of the game can be directly attributed to the W.

Our offense and defense can go toe to toe with anyone in the division, but special teams will cost us games if something doesn’t change.

I really think it’s all of the above…

Cruz kicked off after the 1st TD and last week. VanSickle came in and put every kick in the end zone for a touchback unless I missed one. I am not sure what you are talking about there.

The punt block was bad, but the play calling to run the ball was text book when the defense has 3 timeouts. This is especially the case after a sack fumble on the previous series.

Van Sickle did not put every kick into the endzone…I think he did twice. But he kicked off well short of the end zone more often than he did into it.

You’re right about Cruz in game 1…because I even mentioned to another fan close by that Healy must have told him to do it (kick short) intentionally so we could work on the return coverage. But at this point…I really do think something is wrong with Cruz. Not kicking into the endzone in game one…not handling KO duies in game 2…and missing an extra point?? I think he must be dealing with some sort of nagging injury.

Here is the list of kick-offs. It looks like half were touchbacks. I thought Cruz was kicking them to start with, but after watching he did not. I agree with Cruz and wonder if he tweaked something or was not feeling right.

“STs” will probably be a focus this week. I’m impressed so far with the O & D. 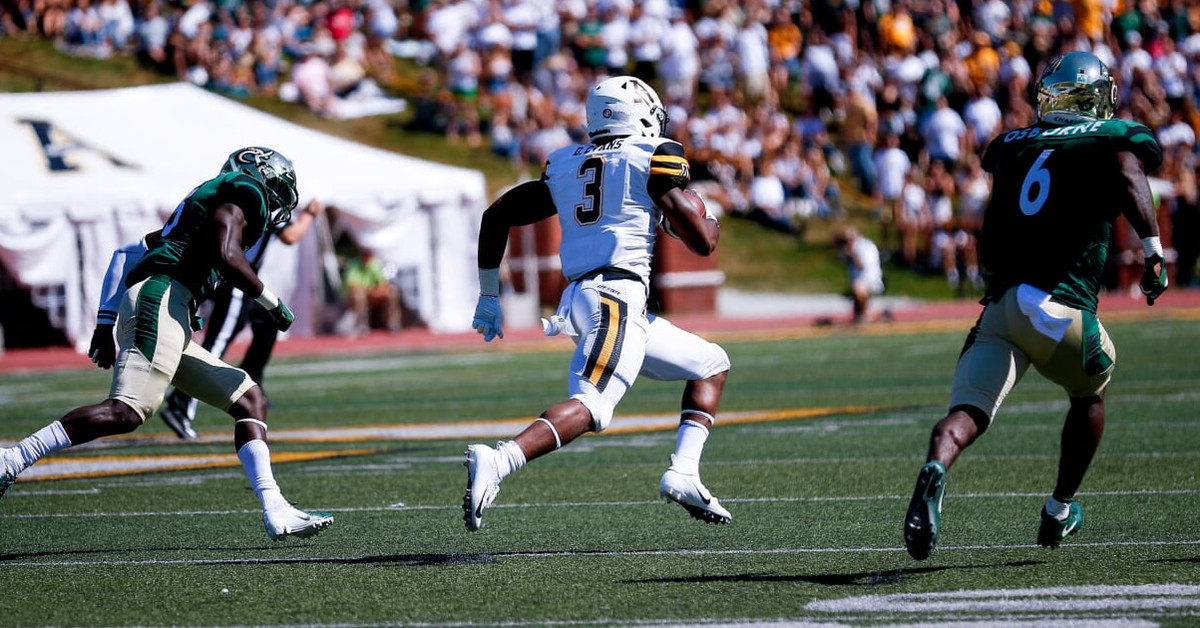 An in-state rivalry renewed, for the last time until 2026.

I have no inside info, just relaying what I thought was nothing at the time during the GW game. Cruz was on the sideline around the practice kicking net and to me it looked like he tweaked his lower back. Grabbed it and was ginger moving afterward.

It wasn’t even during a practice kick. From my eyes the motion didn’t look like it should have caused anything. Maybe he was already nursing something.

We have also gotten next to nothing in kickoff return yardage compared to our opponents.

I was extremely discouraged in our kick coverage and the coach constantly having to tell at them to run to the endzone when covering kicks. That is purely effort and we had several that weren’t giving what the coaches were expecting.