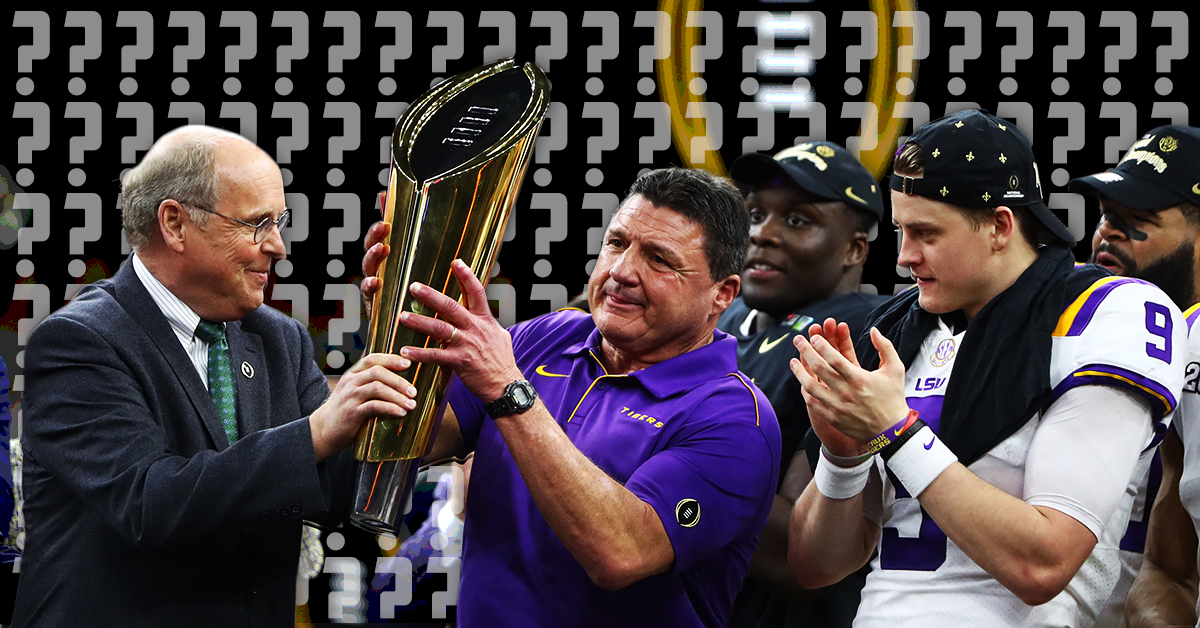 Are we getting that much closer to a bigger field?

Still pulling for it, the UCFs of the world (US) need a shot at the big game.

If expanded the first round of the playoff should be played on campus.

4 is enough. No way to argue the winner wasn’t the best team in college football since the inception. Just leave it.

UCF’s claim is a legit reason to expand. Were they better? probably not. Did they go undefeated and beat the only team that beat Bama. Yes.

It could easily be argued (and have had the conversation with several other employees from AD departments at"power" programs who privately agree - particularly over UCF and the propaganda to convince the world they weren’t as good despite the evidence to the contrary).

Eliminate one out of conference game and give the champion of each of the 10 conferences a bid, plus two at-large bids (12 total teams). The top 4 seeds get a bye. Now you have 10 regular season games, a conference title game, and 3-4 games to win the NC. That’s a total of 14 to 15 games.

BOOM. Everyone has a chance and no more Alabama claiming titles it doesn’t deserve (hello that year they finished 4th in their division and never cracked the top-20 in the polls, which they still claim), while shaming UCF for its undefeated season.

If you read it they are in favor of going to 8. And they aren’t in favor of that so they can add non-P5 schools to the mix. They would add 1 non P5.

It has worked just fine thus far. I don’t think because 1 team in six years thinks they were hosed is a reason to change the whole season.

And it’s more than one team (OSU, Oklahoma, etc., have all had claims within the power conferences). Meanwhile, SEC teams hide in their monumental homes and never play true road games In order to pad their records, while they allow ESPN to convince the world its okay if they don’t challenge themselves because they tell us the other teams in their conference are good (who likely haven’t challenged themselves). It’s okay if they don’t play any road OOC games and have two losses and don’t win their division. They deserve to be in over team XX because we’ve convinced the masses that the “eye test” makes them better. It’s a self fulfilling prophecy if an SEC team preseason ranked 5th that beats Citadel or Marist, ULM, and UTSA all at home OOC, then plays another SEC team preseason ranked 9th with a similar OOC schedule. Neither has done anything to deserve being ranked where they are, but when one wins they get a “ranked win” and the other gets a top-5/10 loss that allows them to keep their playoff hopes alive. Now they’ve got the “win that justifies their lofty ranking” even though it’s a house of cards and it doesn’t actually do that if you look past the surface. It’s a logician’s nightmare, but people have swallowed it so far because that’s “the way it is.” Doesn’t mean it’s right. And of course, none of them will play at UCF or Boise State, etc. - flatly refusing to schedule them, but will then tell them to play someone if they want a playoff spot. It’s ludicrous. They’ve gamed the system to shut out 2/3 of the teams.

If they want to say they’re better than the AAC champion or the MAC champion or whatever, I’ll be fine with that when they’re willing to play them on a neutral field when it counts. If they are better, that shouldn’t scare them. And the proposal above doesn’t reduce their opportunities for teams to play for the title- it just means they have to earn it for once.

I’ll never go for a system where conference winners get automatic bids.
Especially in scenarios where one division of the conference is stronger than another.
Basically, if anyone had beaten Clemson in the last few years (minus Miami in 17), the ACC champ should not be in a tourney.

Why? It’s the same with the NCAA tournament, and there would still be two at-large bids to allow Clemson to be in (even though there was an argument about whether Clemson should’ve gotten in at all last year, which I thought was silly). And when you compared the actual crap that makes up half the conferences, there isn’t really the difference that people claim (Arkansas, Kentucky (usually), Vandy, Ole Miss, South Carolina, Mizzou, Miss. St., are all pretty bad). If FSU had won, they’d be seeded lowest and they’d have to win 4 games (5 if you count the conference title game) on neutral fields on the hardest path to win the natty. At that point- I think they’d have proven themselves. National titles shouldn’t be won on paper.

Another argument that’s often made is that they might be the best, but their conference is too weak. Having weak conference mates doesn’t make your team weak- that’s a logical fallacy. Otherwise, Gonzaga would never be an at-large in the NCAA tournament. Loyola Chicago wouldn’t get a chance to prove themselves, etc.

Auto qualifiers is a bad idea. For football and basketball if you’re trying to have a tourney with the best teams.

68 teams versus 12.
20 conference winners don’t deserve to be there and that is offset by 48 real teams being there.

My criteria would be if you lost three games you aren’t eligible. After that, we’ll see.

This is a sports take that I’m as fierce on as any.

Since the inception of the FBS playoff the SEC SOS has either been 1 or 2. What more could they do to play a harder schedule

They could play true road games and stop padding wins by only playing home buy games OOC. That’s a great start. SOS metrics are flawed for that very reason (and it depends on which SOS metrics you’re using as to which is the flaw- rankings, win percentage, etc.).

Oh I’ll go to the mat on it. Then they wouldn’t win. But right now they’ve created a system where the can single handedly block deserving teams from being in because they view them as inferior. Disparage their opponents, refuse to play them, Never play an OOC road game, etc. They’ll do everything but actually play them on a neutral field in a game that counts. And it’s not like they could “slip up” and win a national title. They’d have to “slip up” 4 or 5 times in a row. Additionally, that system wouldn’t take any spots from the current teams- only add spots for other contenders. It would be a much more legitimate champion, statistically and logically.

I think it’s interesting that in the world of athletic departments and conferences that I’ve interacted with over the years (mostly east coast and midwest - both G5 and P5), the overwhelming think it’s a BS system.

I’ll also add that FCS does it with fewer scholarships and just as wide a disparity in conference quality, but doesn’t have any controversy over the champion any year. That’s a legitimate title.

It sounds like your issue is more with conference title games- which is a different topic. They can go back to regular season champs if they want to avoid that.

There’s a difference between the team with the best season and the best team at season’s end. All this talk of upsets in conference championship games and how those teams wouldn’t belong is seeing it a bit shortsighted, looking at records only.

If a team with a shoddy record gets hot, pulls off a huge conference championship win, then that would likely mean they’re playing their best football. At that point, who’s to say who would really have a shot at the national championship.

And if you want to compare it to March Madness, that tournament is all about who is playing the best ball at the end of the season. A team does just enough to get in, and no one is claiming fallacy if they go all the way. Why should it be different for football?

You’d go to the mat that Miami and their five losses (oh, not fla) deserved to go to a championship tourney over 30 teams that didn’t lose 5 games?

Again, I’m not saying deserving teams shouldn’t go, but just because you won your conference doesn’t mean you should go.

FWIW, WAC probably wasn’t that strong since it discontinued football after the 2012 season.

my thing is that a 2012 Georgia Tech at 6-6 or Pitt in 2018 at 7-5 doesn’t deserve a chance ina limited team tournament because they beat a favorite on a neutral field. That team got their because their side of the conference was soft. That team didn’t do stuff right for 12 games but beating Clemson on a neutral field in front of 25000 people makes them one of the 12 best teams in the country??

Or that a 7-5 Miami Ohio team deserves to go for beating 7-5 Central Michigan. That make them one of the 12 beat teams in the country???

FWIW, WAC probably wasn’t that strong since it discontinued football after the 2012 season.

Exactly. Why should they get a team in this tourney???

Sorry, the mountain west will always be wac to me.

(True story, the rapp term wac, was named after the Western Athletic Conference. White media have changed it to Wack.