@Hunter_Bailey45
Spring ball will begin for @CharlotteFTBL on February 21st. The spring game will be held on April 2nd.
1 Like
MeanJoeGreen February 3, 2022, 8:37pm #2

I hope our defense can keep this one close . Yeah right 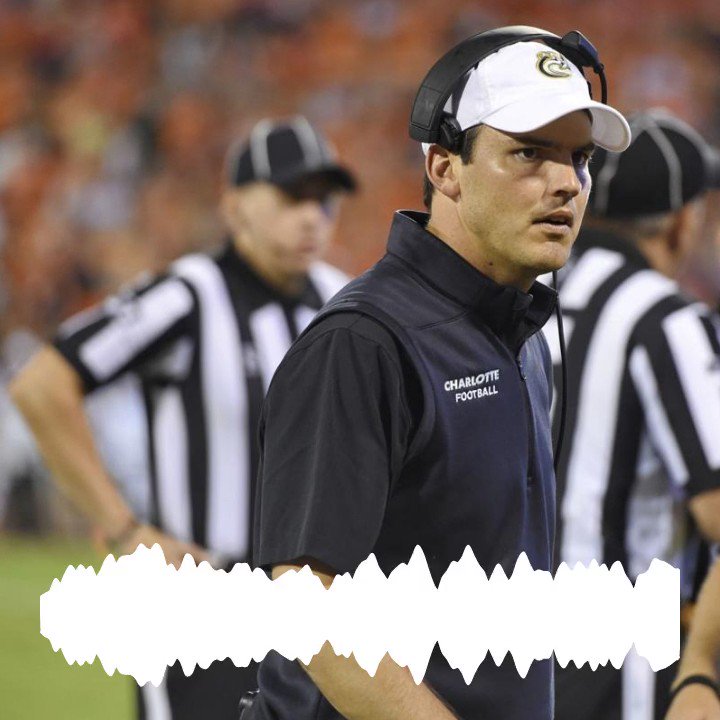 @BobbyRosinski
What is the latest with coaching search on defense for @CharlotteFTBL ? Will Healy joined @TheRush730 to answer that question and give the latest with the plan for spring practice. https://t.co/16SHshl3Js
MeanJoeGreen February 3, 2022, 9:15pm #4

Looking for love in all the wrong places

Club Lit has lost its glamour? No line out the door anymore.

I don’t think you can call it defense when you allow 500yrds and 40+ pts per game. At that point it’s called an Escort …since all we’re doing is escorting them down the field.

But no way should we call what we have a defense.

Well not there there was any doubt but that’s straight from the horse’s mouth that we’re looking for a DC.

How many D1 schools don’t have a DC right now? Hopefully his perfect hire can brings some recruits.

I like Coach Healy and expect him to bring in someone that will improve on last year’s defense. The offense just needs a little help from their defense to win 6

I heard Healy mention Jon Jacob’s and Dimitri Emmanuel when talking about returning players. That’s good to hear. The only hole appears to be at RG to replace Gist.

Correction: The only replacement we have is at C for Hunter Kelly.

Listening to the entire interview, I can understand Healy being frustrated with the Portal. His out of control descriptions are systemic of what the NCAA HAD Chosen to forgive and forget Chapel Hole’s death penalty violations. That was followed by the NCAA allowing athletes to be paid officially. Now the Portal is just a free for all that has Healy jittery about recruiting and his current players being recruited 24-7. NCAA is now an open and obvious farce

@PeteThamel
Sources tell @ClowESPN, @Mark_Schlabach and me that Alabama is expected to hire Joe Cox as the schools new tight ends coach. Cox is the tight ends coach at Charlotte and a former assistant at South Carolina (WR) and Colorado State (TE).
run49er February 4, 2022, 3:37am #13

FWIW, a unanimous SCOTUS decided that athlete’s could receive monetary compensation. The NCAA fought that tooth and nail to the end.

Alabama is poaching us now??

Moving up in the world!

@Hunter_Bailey45
The 49ers are working to finalize their coaching staff and round out the Class of ‘22. With spring practice on the horizon, here’s an update on the hunt for a defensive coordinator & the current roster. https://t.co/JaWcn1r30I
1 Like
Daniel49er February 4, 2022, 9:29pm #17

Are Hunter’s links broken? Every time I click on his articles, it takes me to a page wanting me to subscribe to a shitty paper.

I can’t read them either. Could someone summarize what is written

Entering the fourth year under head coach Will Healy, Charlotte 49ers spring practice is approaching, and there are plenty of questions surrounding the team’s defense. Coming off a disappointing end to a 5-7 season, Charlotte is looking to fill three coaching vacancies, two of which are on the defensive side of the ball, including the addition of a defensive coordinator. This story is a subscriber exclusive TOP VIDEOS WATCH MORE × NBA Next Game - Atlanta Hawks The return of many seniors, including quarterback Chris Reynolds, has provided optimism for the 2022 season. But avoiding a repeat of 2021, where the defense unraveled down the stretch, will be make or break for Healy’s group. Charlotte has signed 17 players for the class of 2022, ranking 107th in the nation and 8th in Conference USA, almost identical to the 2021 class (108th, 7th), per 247 sports. Healy and his staff will continue to evaluate the transfer portal throughout the spring and will announce more roster additions when the summer school session begins. With Charlotte’s final season in C-USA on the horizon, the 49ers are preparing to make the jump to the American Athletic Conference in 2023. Here are two things Charlotte must do this off-season: FINALIZE THE COACHING STAFF Charlotte lost five of its last six games in 2021, rounding out the season with a bottom-10 total defense in the nation. The 49ers’ defense ranked 13th in Conference USA, allowing 465 yards and 34 points per game. Following the season, the program parted ways with co-defensive coordinator and safeties coach Brandon Cooper, as well as cornerbacks coach Eddie Hicks. Find more sports news, plus coverage from Sports Illustrated. READ MORE Tight ends coach and former Independence High School standout Joe Cox is expected to be hired in the same role under Nick Saban at Alabama, first reported by ESPN’s Pete Thamel. The 49ers will now look for their third tight ends coach in as many seasons. The 49ers are likely to eliminate the co-defensive coordinator title they had last season and bring in a new coordinator — depending on the remaining candidate pool — ahead of spring practice, which officially begins on Feb. 21. But the clock is ticking. Healy elaborated on what he wanted in the additions to his staff before Early Signing Day in December. “Recruiting, number one. Guys that have really good contacts and relationships with high school players, especially in the Carolinas,” Healy said. “Guys who have shown the ability to evaluate and recruit at a high level. Schematically, guys with answers. We’ve had really good interest in the two positions, and we’ve got some great fits.” TOP WORKPLACES 6 Ways Psychological Safety Can Help Create a Better Workplace Culture Yes, your workplace is probably racist. Here’s how to start fixing it. Rising workplace benefit: Fertility services How Ally Creates a Caring and Inclusive Culture SPONSORED CONTENT The 49ers have interviewed various high-level candidates for the defensive coordinator position, including former North Carolina defensive coordinator Jay Bateman. Bateman has since accepted a role with the University of Florida coaching linebackers. “I feel good about it. We’re on the right track, we’re close. We’ve just got to get some deals done, and I feel great about what our candidate pools look like and what we’re settling in on,” Healy told The Observer following National Signing Day on Feb. 2. “One of the reasons why I’m moving (spring practice) back is to make sure that we can have everybody in place,” he said. “My time frame for this is for us to have meetings with guys next week and get rolling with installations to be ready.” It is unclear whether the current assistant head coach, co-defensive coordinator and defensive line coach Marcus West would remain on staff, or move on from the program. RECRUIT THEIR OWN The last time Healy spoke with the media, on Early Signing Day on Dec. 15, Charlotte was one of two programs in the nation (Georgia) without a player in the transfer portal. He spoke about the importance of recruiting their own. “Retaining players is extremely important to me. Having a coach in those positions who will retain players and make it a great experience, we’ve got to recruit our own as well,” Healy said. “We want guys that will develop relationships and be able to recruit people in our own building. If you look at this transfer portal now, right now we’ve been fortunate.” Since then, the 49ers have lost the leading tackler and captain of the defense Tyler Murray to Memphis, and reserve cornerback Jonnie Pittman to the transfer portal. With Murray’s departure, Charlotte will be starting three new linebackers in 2022. While the defense continues to pose questions, the offense has returned nearly all of its production from 2021 (93.19%). Current returning starters include: OFFENSE: Jaxon Hughes (T), Jon Jacobs (T), D’Mitri Emmanuel (G), Ashton Gist (C/G), TJ Moore (T), Calvin Camp (RB), Shadrick Byrd (RB), Grant DuBose (WR), Victor Tucker (WR), Elijah Spencer (WR), Taylor Thompson (TE), and Chris Reynolds (QB). DEFENSE: Markees Watts (DE), Kofi Wardlow (DE), Isaac Hampton (DT), Jalar Holley (DT), Geovante Howard (CB), Trey Creamer (CB), and Davondre “Tank” Robinson (S). SPECIAL TEAMS: Jonathan Cruz (K), Bailey Rice (P), and Camron Lyons (LS). The roster for Charlotte’s final season in Conference USA is taking shape, and while the 49ers will continue to attack the transfer portal for reinforcements on the defensive side of the ball, finalizing the staff and bringing in a new defensive coordinator will answer many of the burning questions.

Thanks for posting. I’m disappointed with the ranking we have with football recruiting, but from what I can tell there is very little difference between the 80th recruiting class and 110th. They all seem to have similar averages but vary their number of commitments. It just seems love splitting hairs in the back half of recruiting rankings. This is a good point (and didn’t know this stat) that were with Georgia as the only schools without transfers (prior two pitman and murray) Murray. That says a lot about the culture and staff but also may help soften the blow of a lower recruiting class ranking on paper?