Two off seasons. Hopefully that means phase 1 and 1a started next off-season?

Did they have any games scheduled with the new folks coming in? If so maybe they will.

With the expansion it’s nothing but money. It’s possible they build both sides at once. Imo depends on the financing model they are using and what is being donated.

Update from the Evergreen site regarding naming rights:

Soccer/ Lacrosse Stadium: Looks like 2 items have been removed from the naming rights section. Not sure if that means they have been sold or not. ‘Concessions’ was removed 4 x $50k each & ‘Pillars’ were removed 11 x $25k each. That’s a total of $475k.

Where was it listed that we’re not using athletic fees but only donations to build this project?

Also, when did USA Today put up a paywall?

We just said we were not increasing any student fees to pay for this I believe. Not that no fees were going to go towards it.

Where? I haven’t found that statement online.

Got an ECU guy saying we’re going to jack fees to cover cost of moving to AAC, and Evergreen.

I will look around but pretty sure Mike said that in the interview. And the reality is once they have the % of capital required to issue the bonds they just have to have the cash in hand to pay the bond interest while continuing to fund raise. No reason to think new fees or increase in fees will be required. ECU guy has some balls talking to anyone about finances of an AD.

In addition to this, increasing the student fee would take approval from at min the BOG which I am certain is a no go. The AAC move and facilities are gonna have to happen with minimal impact to fees. I do know the target is in 3/4 years to be at a 50/60 million dollar budget neighborhood. Up from our current 37. ECU is at 43 mil so they will be easy to pass just with AAC tv money. AD told me they know they need to be in the 50/60 range to compete in the league.

CHARLOTTE — The Charlotte 49ers plan to double the seating capacity at the school’s on-campus football stadium as part of a long-term facilities plan released Tuesday afternoon. The initial phase, including expansion of Jerry Richardson Stadium and building a combination soccer-lacrosse stadium, will cost $102 million and depend entirely on private fundraising to pay for the projects. 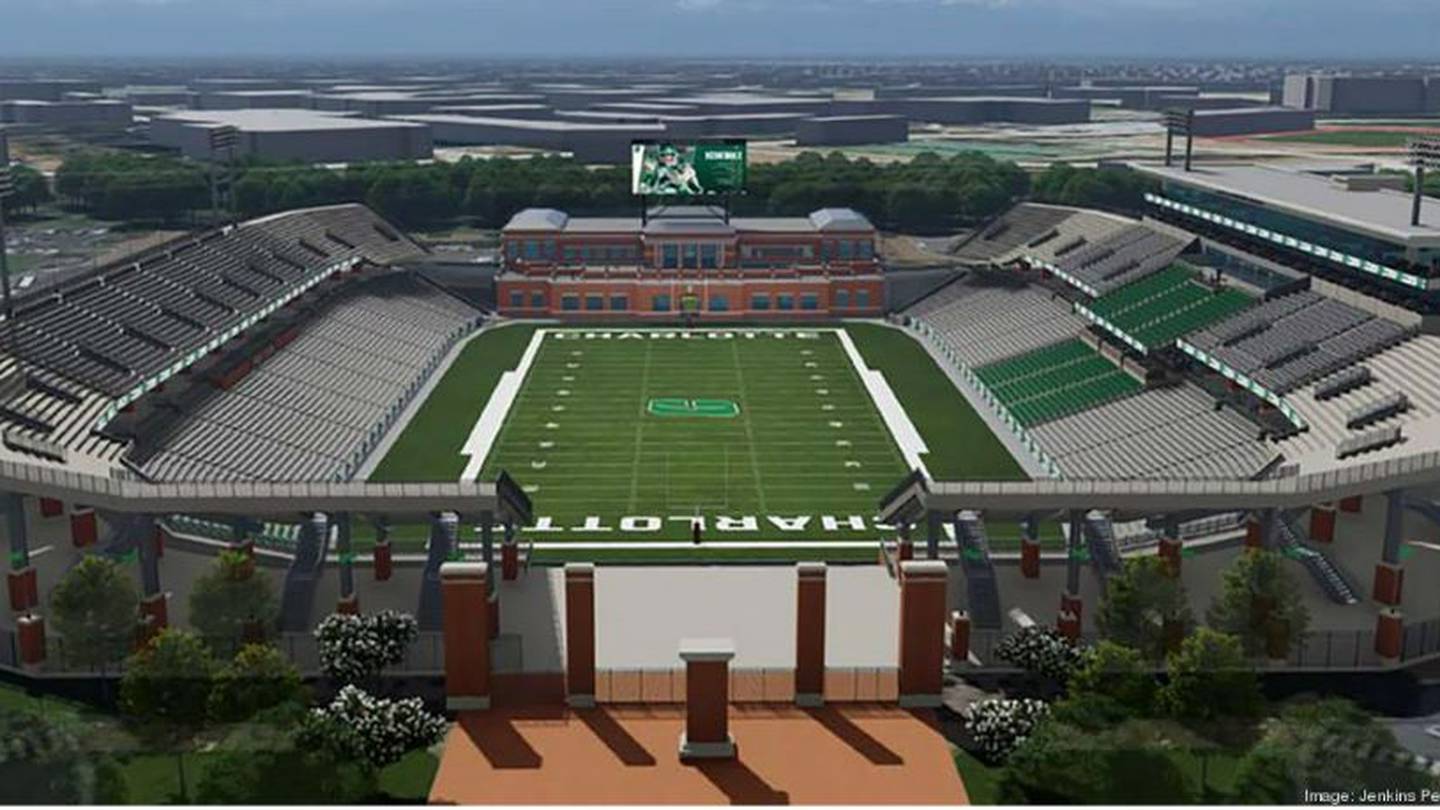 The initial phase, including expansion of Jerry Richardson Stadium and building a combination soccer-lacrosse stadium, will cost $102 million and depend entirely on private fundraising to pay for the projects.

UNC Charlotte plans to “double the seating capacity at the school’s on-campus football stadium as part of a long-term facilities plan” released this afternoon. The initial phase, including expansion of Jerry Richardson Stadium and “building a combination soccer-lacrosse stadium,” will cost $102M and “depend entirely on private fundraising to pay for the projects.” Sports design firm HOK and locally based Jenkins Peer Architects “assembled the long-term blueprint for the school.” The target for completing the multi-phase plan is “12 to 15 years.” Expanding the football stadium to “more than 30,000 seats as part of a two-stage process” will cost $81.3M. Charlotte AD Mike Hill said that “fundraising has begun” but “declined to disclose details on initial commitments.” Hill added that the football stadium expansion projects “would take two to two-and-a-half years to finish once the money has been raised” ( *[BIZJOURNALS.com, 5/24]

I found a separate source as well: Charlotte 49ers, an Athletics Department at the UNC has revealed its vision for the EverGreen Athletics Facilities project.

Just found out parking is going up for tailgating. Not much but I would guess there are lots of little nuisance fees raising money

Does Athletics get those in full or part from Parking Services?

Yeah other non student fees are likely to increase and donor levels etc.

I expect the lock in your FSL seat amount to go up from $250 for sure.

Thats AD revenue. They may have to pay parking services something though. In fact the AD has to “rent” halton and other facilities including their offices.

Over on campus for kid’s orientation and found our brick outside Halton. We should sell bricks for various facilities

Got one at the alumni center. We have names on the base of the statue outside the stadium too don’t we? Missed my opportunity for Halton. But yes, we should do this for all facility fundraising that we can. Wonder if they’re going to do something like that for soccer stadium and baseball expansions. Opportunity there.

I agree. I’ve bought those and they’re fun to point out when I visit and bring family / friends.

From what folks involved with the past brick fund raiser have said it’s a very poor way to raise money unless the bricks are fairly expensive. It is a lot to manage with a high probability of something going wrong. I do love my bricks though!

I got some from WDAV last year and they got us twice. Paid for full sized bricks outside the station and mini replicas that they mailed to us

I agree it probably doesn’t create much fundraising for the sale, but it’s those kinds of things that help to keep people around a bit too. It’s a way for the average fan/alumni to feel more a part of it all. It’s a couple generations of fans seeing them over time… Like maybe my son taking one of his kids and pointing out a brick I did. That was the dream at least lol.