Discussion of all AAC members expansion and facilities upgrades, including new members.

Our soon to be conference mates with a big upgrade announcement: 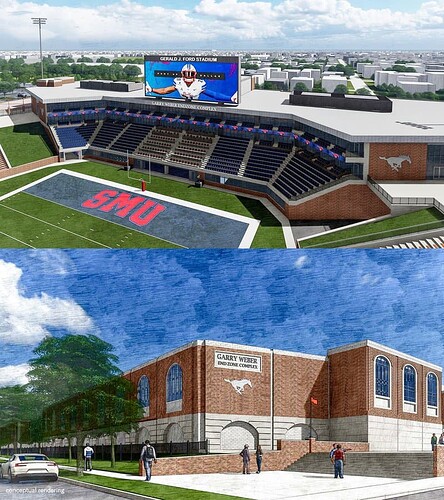 @therealBeede
Breaking News: #UCF Athletics is finalizing a naming rights agreement for the football stadium that is worth $19.5 million over 10 years between UCF and an unknown naming partner. As @itsBrysonTurner first said, the BOT will meet Tuesday to approve. More: https://t.co/IhZEoE5RvQ
Nineradvocate May 28, 2022, 12:58pm #4

I wish Judy would have made the big cat’s naming rights deal 10-12 years, maybe even 15. Would have been a lot smarter in retrospect.

Here’s hoping he has upped his ante for the expansion plans and it’s all a wash in the end.

How much longer do we have Richardson stadium under contract?

That’s ok. As long as The Big Cat keeps cutting checks for us forever.

Or at least one really really big is one

Yes,but we need Centene (and Tepper) even more.

Is there even a possibility for Centene or Tepper?Any rumors? That would be great but Richardson and McColl are already invested. Would love to see them make another big contribution.

SMU is going to be interesting to watch in the NIL era.

Jerry is sitting on a ton of cash and is at the far end of what he could expect post heart transplant. I’d love centene and Tepper getting on board for future but Jerry could make a massive donation - transformational in nature if he wants. He’s said he doesn’t really want to leave much for fam so that means giving it away. He sold the panthers for billions. He could drop 250 mil and still have plenty more to pass out.

@FBCMortgage
We are happy to announce that the Bounce House at UCF is now FBC Mortgage Stadium! As many of our employees have graduated from UCF, we are so excited! Go Knights!🏈⭐ https://t.co/wVpgHVExWy The UCF Athletic Association and FBC Mortgage, LLC, have combined on a naming rights agreement for the Knights' home football stadium that takes effect beginning

The 10-year, $19.5 million deal means UCF football teams will play their home games in FBC Mortgage Stadium through the 2031 football season. The new arrangement begins July 1–following its approval today by the UCF Board of Trustees.

@Memphis_MBB
We're making plans for a new court at @FedExForum next season! Use this template below and reply to this thread to show off your ideas and design skills! 🎨 #GoTigersGo
d_whitley June 1, 2022, 1:44pm #16

Can’t be worse than it already is. 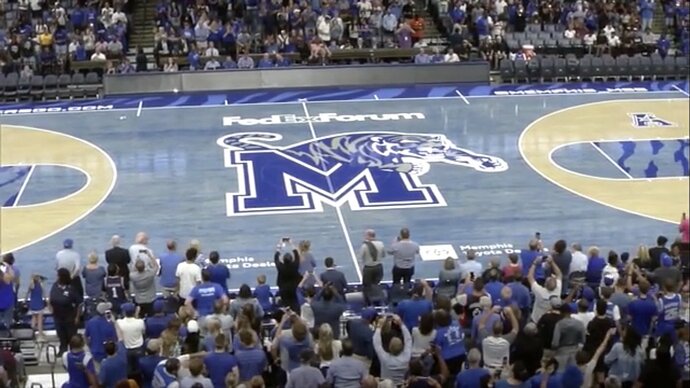 That court was so awful.

Well, at least it did get “circumcised” after the initial realization of the twin tiger genitalia! 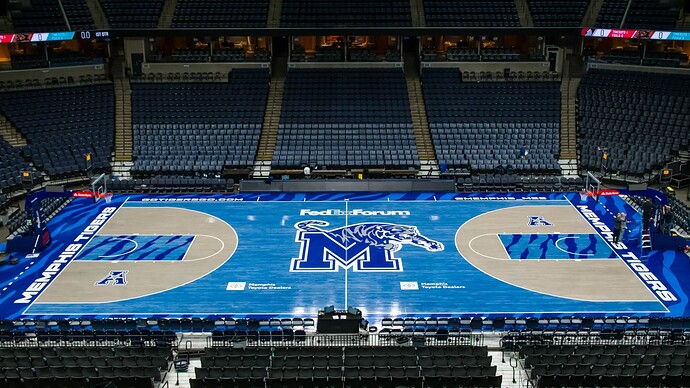 I’m so glad Hill kept our new court simple and classy. I hate the roller coasters, palm trees, and all that other garbage that teams have started covering the court with.

I do think it’s kind of cheesy we did our football field in team colors like Boise St and EWU.