Charlotte, N.C. – The Charlotte 49ers will celebrate their 50th Anniversary of NCAA Div. I athletics during the 2020-21 season. Highlighting the year-long anniversary, Charlotte will announce the inaugural class of the 49ers Athletics Hall of Fame.

Nominations are open to the public and will be voted upon by the 49ers Hall of Fame Selection Committee. Nominations for the inaugural class are due by April 22, 2020. Further details about the first class, the induction ceremony and the 50th Anniversary celebration will be released at a later date.

Membership in the Charlotte 49ers Athletic Hall of Fame shall be limited to those individuals who have brought great distinction to the university, enhanced its reputation, made outstanding contributions in one of the following areas and meet the following criteria:
1.) An exemplary student-athlete with high athletic achievement

2) A coach with a distinguished record

An administrator who has made a long-term, exemplary contribution through strong leadership

3) An individual whose contributions have brought distinction to the university’s athletic program.

For the inaugural class of 2020-21, an eligible student-athlete’s final competition must have occurred in or before the 2014-15 season. Active Charlotte 49ers’ coaches and administrators are not eligible.

Nominations are due by April 22, 2020. To nominate someone, please visit :

I’d waive the five year thing and put Larry in.

He’s done more for the school than any athlete we’ve had in the last 20 plus years.

That is great. Here are my thoughts for the inaugaral class.

Student Athletes: Cornbread Maxwell, we have had some top flight soccer players that probably need to be here, maybe someone that played MLB?

I guess Cesar Sayoc is not eligible?

Does our Hall of Fame = Retired/Honored Jerseys? If so, this will be easy, but what is the point?

I’ve got Judy Rose locked in for my first pick. Please respect my decision.

Maybe not first class, but Corey Nagy has definitely been one of the best golfers to come out of Charlotte That went pro and really put the program on the map during his career here.

Paula Bennett for sure! 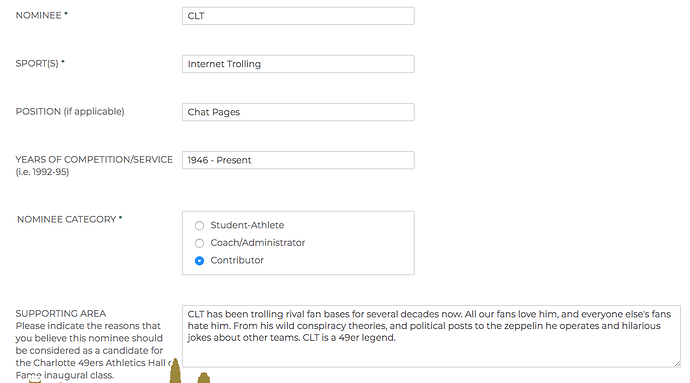 All of you need to nominate the OG chat page legend.

Nominated Lutz. Should be a no-brainer.

Gonna be funny having Judy and Lutz side-by-side.

All of you need to nominate the OG chat page legend.
[/quote]

Have we had a better baseball player than John Maine?

As far as basketball, I think Eddie, Henry, Maxwell, Jobey would be logical choices, maybe not all first class but eventually.

Also, Lutz statue MUST have stache.

And Leemire Goldwire gets in just for having the best name ever.

Judy should not be eligible in the first class since it is supposed to be 5 yrs.