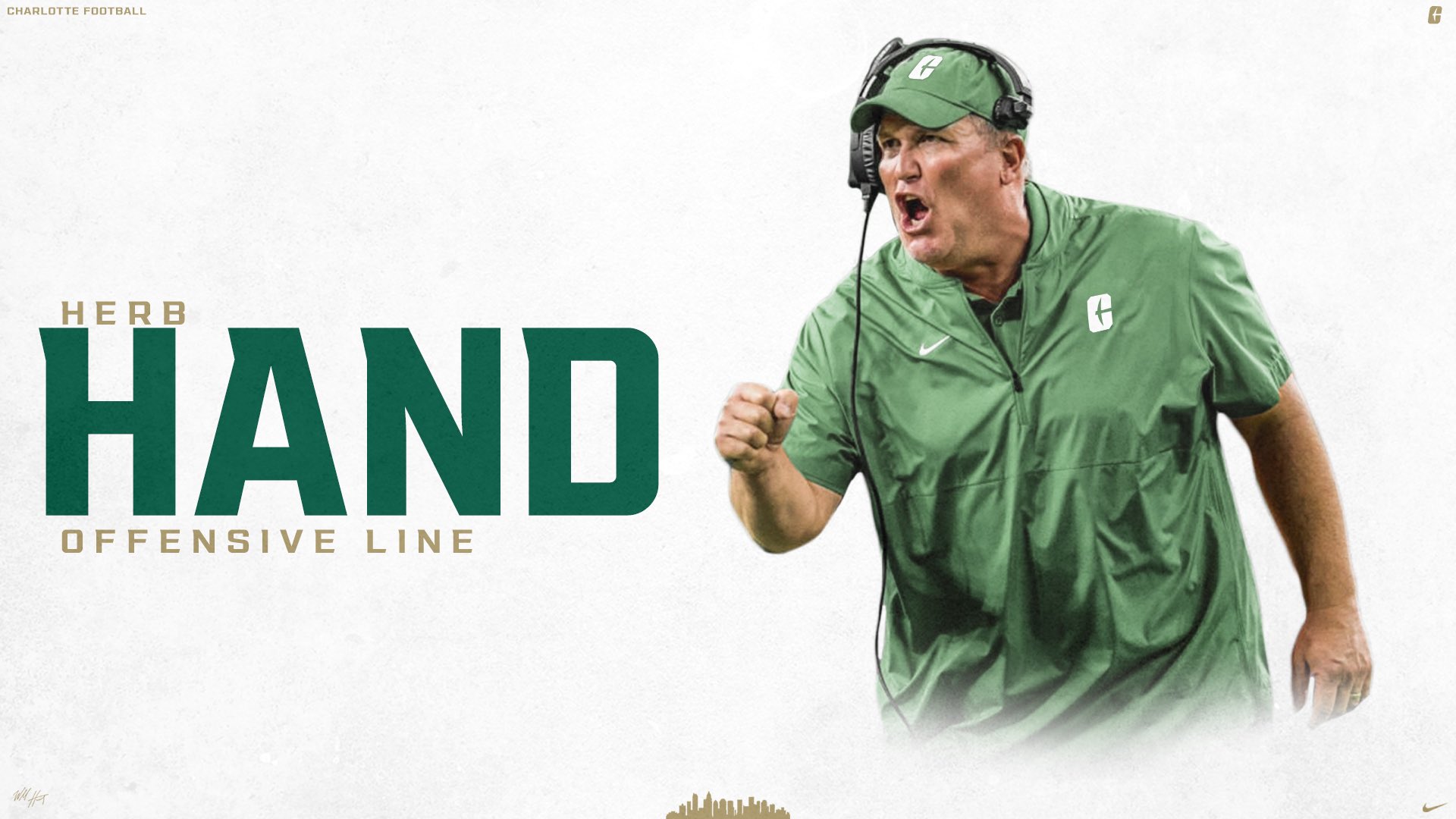 Charlotte 49ers head coach Will Healy has announced the hiring of Herb Hand as the program's offensive line coach. Hand, who boasts 30 years of coaching experience,

Did we lose someone from the staff?

I am going way out on a limb here and say I believe we made a very good hire with Hand. Wonder how long he will want to stay in Charlotte? He has jumped around a lot in the last 15-20 years. Maybe he is ready to settle down and enjoy the Carolinas.

Maybe Hand is a potential head coach in waiting should our head ball coach leave? Don’t know his personality, but he quotes Bruce Lee, so he has that going for him

Afternoon Rush – Herb Hand – Next step for CLT is to compete for the C-USA...

Coach Hand was a great hire. I can’t believe how lucky he fell to us. Coaches like this don’t come around very often.

Coach Hand was a great hire. I can’t believe how lucky he fell to us. Coaches like this don’t come around very often.

They don’t stay around very long either.
What’s the over/under? 2 years? I’d take the under.
He either gets hired away in a year or two or Healy finally gets his wish and gets out of here and takes him with him.

Not sure how we’ll ever succeed hiring new coaches every single year. Not just position coaches either…Healy has been all but begging to leave ever since he got here. How many jobs has he interviewed for…60?

Our most successful 15yr sports era (late 80’s to early 2000’s) in our top 2 sposnored sports consisted of: Mullins to Judy (AD), Lutz (basketball) and Hibbs (baseball) . They all had their warts too but they won more here in 15yrs than ANYONE will ever match in the next 30. Why? THEY F#$CKING WANTED TO BE HERE!!!

All of these new hotshot coaches…be it Woodard, Chastain, Sanchez or Healy…none of them are here if they win just ONE conference championship in their first 2-3 years. Hell, Healy’s been trying to leave ever since his first season here!! The thinking that if you hire someone that’s good and gets hired away then we can build off of their success is non-sense if they are only here 2-3 years. All of the networking and relationships and systems takes the better part of a decade to build up to a sustaining level. Otherwise, it all has to START OVER from scratch…3yrs or so isn’t long enough to build something that can be expanded on. It’s a patch job that will leave us in just as bad of shape if not worse than when they got here.

If these new hires suck it’s no difference from any other sucky coach…but if they’re good, you know damn well they are gone at the first SNIFF of success. 3-4 good recruiting cycles and 1 conference championship…and they are gone. That won’t benefit us at all. You want consistency? You want to build something that can last? Then you need coaches that want to build a foundation…instead of a resume.

I’m already tired of hiring young hot-shot rent-a-coaches with SEC dreams…give me somebody that gives a sh!t about really wanting to be here and win here. Someone that wants their name on a field HERE…or on a building HERE.

You can’t tell me that’s a pipe dream or they don’t exist or are too hard to find…from 88-05 we had a stable of them.

Supporters of every college program say this…and I agree with almost all of your sentiment, except I’m not sure how quickly WH truly wants/expects to exit. But I believe he was looking at 5 years minimum. Maybe COVID pushes this plan back at least a year.

We have to look at the reality of college sports. Seemingly, even the very best G5 programs, e.g. Boise State, have lots of coaching turnover. If WH gives us 2-3 really good seasons…beginning with 2021…and lands at a P5, then I could see someone like Joe Cox stepping in and taking over. He’s played at the highest level of college football, has a good coaching background, is from here, etc. Heck, his football pedigree is arguably better than WH’s.

All this being said, we can’t do a flipping thing if we don’t get some dad gum consistency in winning ballgames. It’s time.

Supporters of every college program say this…and I agree with almost all of your sentiment, except I’m not sure how quickly WH truly wants/expects to exit. But I believe he was looking at 5 years minimum.

He was interviewing awfully hard after years 1 & 2 to “believe” that 5yr plan minimum is anything more than the typical BS tell-you-what-you-want-to-hear hype that spews out of his mouth constantly.

Yeah we’ve heard lots of things about interviews. Though I’m not sure what is fact and what is hearsay.

I’d certainly welcome clarification on where he has 100% sure had an interview.

Agree with this. Can someone confirm exactly what jobs Healy has actually interviewed for while at Charlotte?

Conference Championships sound nice!! Let’s go win a few of those and see what happens.

Agents get paid a lot of money to promote their clients. Also, why would Healy not want his name in P5 college coaching discussions. Lastly, anyone who turns down millions of dollars because they want to be loyal to a University is too dumb to be a coach. Coaches get fired by Universities almost as much as coaches get hired by Universities.

Conference Championships sound nice!! Let’s go win a few of those and see what happens.

That’s my point…none of our current coaches will hang around for multiple championships. They are all 1 & done-ers. I’d bet they don’t even win 1. A big enough turn around that gets us competing in the top 2-3 of their respective sport will get them an offer to bolt.

At this point, I just want to WIN. I think that before we start getting mad for hiring coaches that are winning and leaving, that we should actually WIN. It has been too long. Somebody prove to me that we can win at Charlotte because our trophies are starting to collect dust.

It has been 20 years since we won our last Conference Championship in Basketball. 17 years since our last regular season title in hoops.

We have obviously never won a championship in Football , and have only had 1 winning season.

In softball, I think we have maybe only 1 Championship?