@GoodmanHoops
More than 35 players and coaches were interviewed as part of Stadium’s lengthy investigation into Gregg Marshall. Shaq Morris spoke exclusively to me: “He punched me while I was facing away over my right shoulder, hit me in my jaw, Morris said. https://t.co/ihLR5Ra3zV”

@GoodmanHoops
Shaq Morris told me that he informed Gregg Marshall that his mother had cancer just hours prior to Marshall punching him in the head in practice. https://t.co/W5R2NpQ2VU

More than 35 players and coaches were interviewed as part of Stadium’s lengthy investigation into Gregg Marshall. Shaq Morris spoke exclusively to me: “He punched me while I was facing away over my right shoulder, hit me in my jaw,” Morris said. https://twitter.com/GoodmanHoops/status/1314413468158701569 … 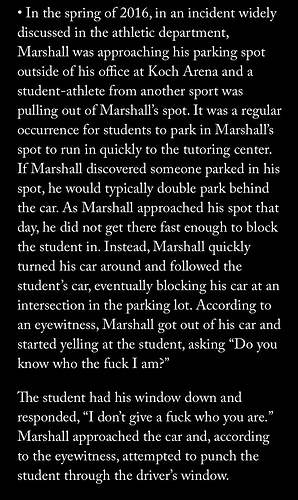 What if Wichita State basketball falls off? Does the AAC keep them considering they don’t have football?

This isn’t surprising. I had always thought there have to be underlying reasons why he never landed a P5 job.

I bet he apologizes 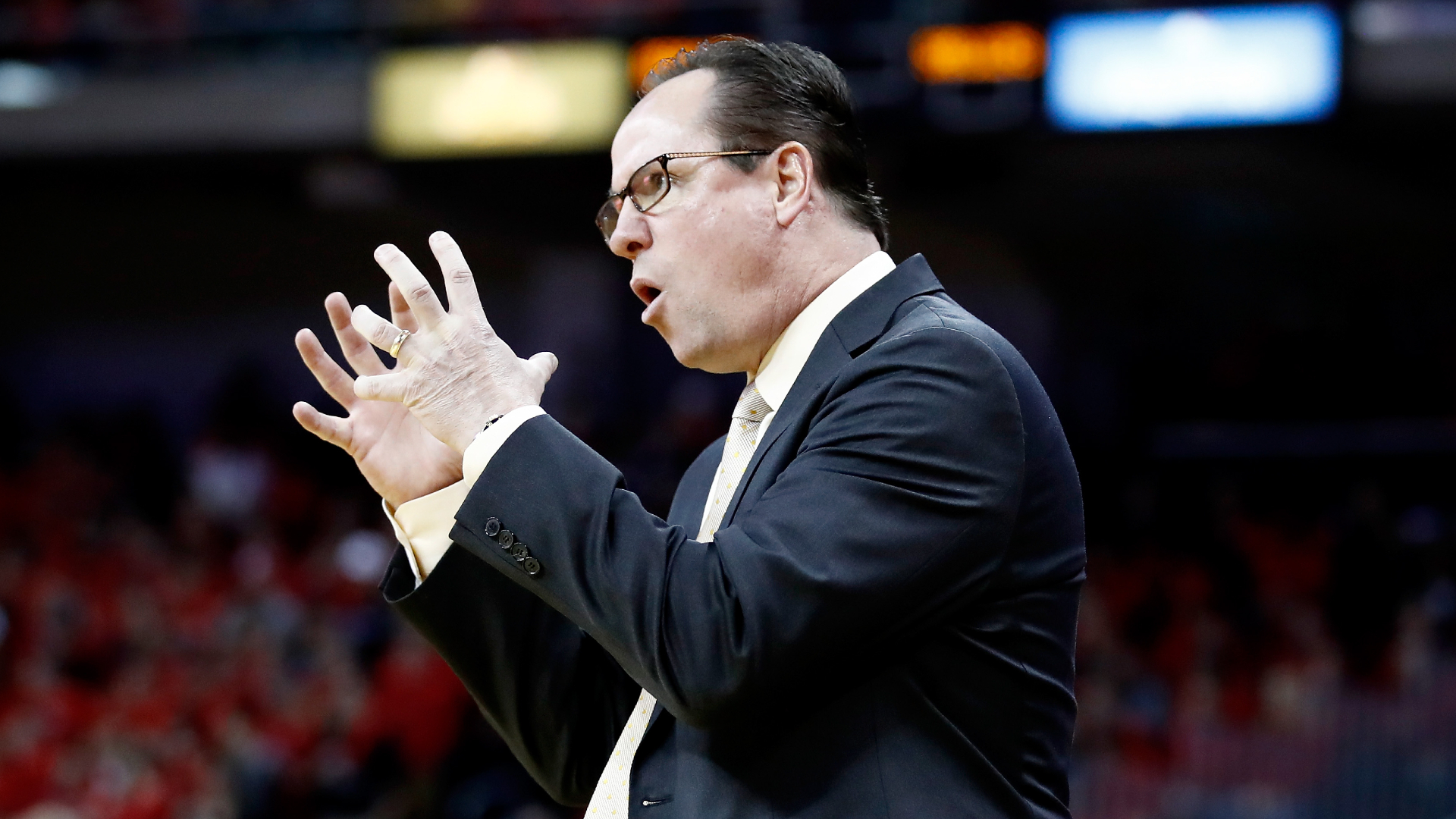 Accusations of mistreatment against Wichita State's Gregg Marshall are...

As shocking as the allegations against him are, anyone who works in college basketball knows Marshall’s sometimes-difficult disposition hardly was a secret.

COLUMN: With Gregg Marshall becoming the latest coach whose job is in jeopardy for the way he allegedly treats his players, it's fair to wonder if this will finally be the incident that eliminates bully-coaching from college athletics. https://t.co/K2kZQNq2dI
Tintin October 9, 2020, 6:57pm #9

I wrote this on the football board a few weeks back

The day of the coach in the shirts and whistle abusing and demoralizing players has ended.

Marshall shocked the few people present at a secret scrimmage about 15 years ago with the way he berated his team.

The AAC needs another football program in the long term, but they can’t kick WSU out for not having football. They knew they were pigskinless when they admitted them. There’s Liberty and JMU. They might accept an all sports bid to join the AAC. Maybe football only in Liberty’s case.

Wow! We are living in an age in which hubris is commonplace, so shouldn’t be surprised by that statement. 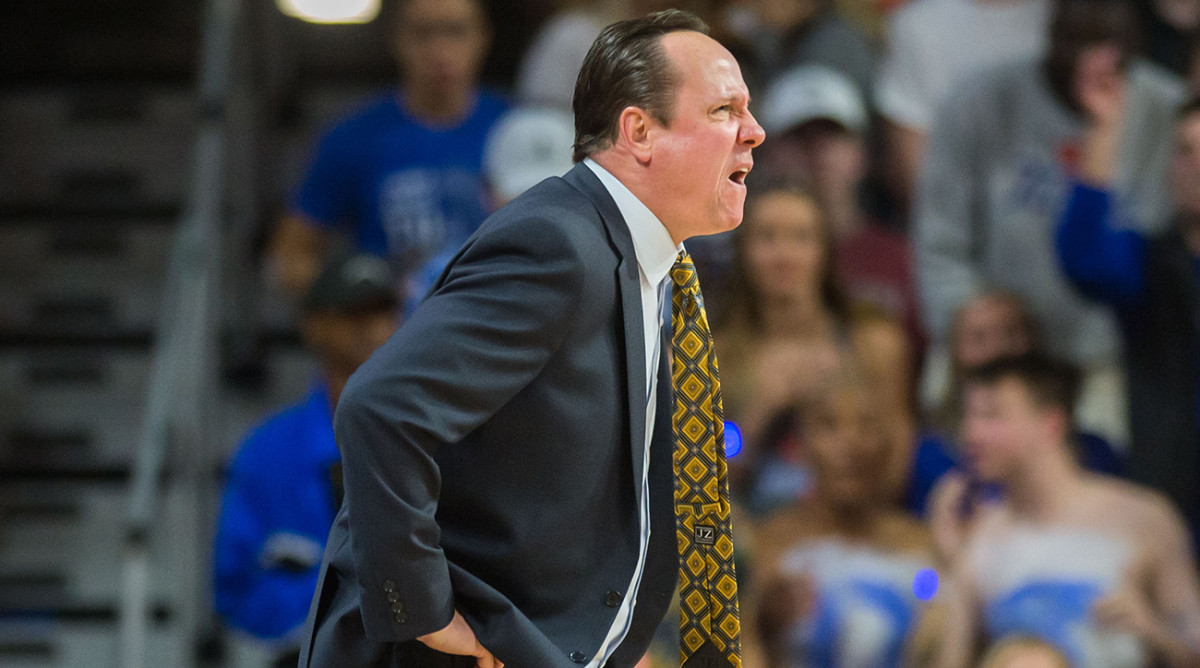 Wichita State has tolerated Gregg Marshall's abrasive style for a long time because of the results. With allegations out in public, the school may be forced to stop catering to its winningest all-time basketball coach.

An addendum from Goodman:

One incident been overlooked in the Gregg Marshall story, per multiple sources:

Marshall taunted junior forward Isaiah Poor Bear-Chandler, who is of Native American descent, “to get back on his horse” and made “Indian howling noises” while in practice during the 2018-19 season.

Wichita State’s Gregg Marshall punched a player, choked an assistant coach, and frequently demeaned players, all allegations Stadium uncovered as part of a 6-month investigation after talking to more than 35 players & coaches: https://watchstadium.com/sources-wichita-states-gregg-marshall-punched-player-choked-assistant-10-08-2020/ …

Plus perspectives from Gary Parrish of CBS Sports and Pete Thamel of Yahoo Sports:

Wichita State's Gregg Marshall is latest coach to put his job in jeopardy for...

Allegations of physical and mental abuse against Marshall are troubling

No way does either Liberty or JMU make that kinda jump.

Wouldn’t think AAC would be ready to trade Bully U for Pool Boy U. Hmm…

Rumor was he wanted to come to Charlotte from Rock Hill. Some people on this board wondered why he wasn’t given that chance. Hmmmm.

It was Winthrop. And there was no rumor about it. He was publicly campaigning for the job. Called it his dream job.

Sometime during his tenure at Winthrop, he accepted the College of Charleston job, went down there for a couple of days, but then returned to Winthrop.