Looking for a new mattress

Alright, there are tons of mattresses out there and we’re in the market. We have an old pillow top that we must replace. Looking to get a King, perhaps a queen sized.

Anyone have experience with any mattress like Casper, Purple, etc?

We bought a Denver Mattress. It is great.

2k, I worked in R&D for about 6 years at one of the biggest mattress manufacturers. Here’s my advice:
If you’re going to get a traditional innerspring mat, go a little firmer than you think you’ll want and avoid pillow tops if possible (though it sounds like you’re looking at foam beds, if so then what I just said isn’t important). The reason for this is those super low density foams that create the “plush pillowy” feel will have their cell walls collapse faster over time, creating a divot (called a body impression) where you lay. Getting a non-pillow top (called a “tight top”) and just slightly firmer helps alleviate this.

If you can, lay on as many beds as possible at a mattress store to try them out and get an idea for what you’re looking for.
Most selling features of mattresses are pure marketing: any sort of cooling material will be present in the mattress at just enough level to make the advertising claim that it’s there, and will only “cool” for about 5 minutes or so, at which point it becomes a heatsink and holds onto heat. Same can be said of other materials, such as “titanium springs” (its just a steel alloy that contains less than 0.5% titanium).

I know a good number of people who love their foam mattresses, but be aware they can sleep hot, and are harder to move around in (if you roll over often at night). You might see “hybrid” mattresses out there, these are thick layers of memory foam (can be up to 6 or 8 inches of foam) over a traditional innerspring. The innerspring helps with airflow (cooling) and gives a little spring effect when trying to reposition in the bed.

In terms of foam mats, I personally know people who have bought and been happy with Temper and Casper beds. I know purple is a rising name in the large “direct to customer” foam mat market, but I don’t have any experience with them.

We did Casper simply because we didn’t want the hassle of a mattress store. Slept on it for about a week and didn’t like it, too soft for us. Called them and they honored their money back guarantee (only thing we didn’t like was that they simply sent a trash service to pick it up which seems wasteful but they said they couldn’t donate it in our area).

Went to Original mattress factory after that and actually tried out a bunch. We’ve had that mattress for a couple months now and like it.

They threw the mattress away? WOW!

This is what we have, but in Queen. It was cheap and easily beats the national name innerspring mattresses we had before. It can sleep a little warm, but I’ve gotten used to it. We also do percale cotton sheets, not microfiber, which is much cooler.

120 day no questions asked guarantee, so if you don’t like it, you waste nothing. Our thought was, if we didn’t love it, we could put it in a guest bedroom at that price. It’s also not $2000 or $3000, so if it only lasts 5 years, so what. That said, we’ve had it almost 4 years, it sleeps like the day we bought it, and has held up significantly better than any mattress we’ve ever had, including the predecessor to this one which was much more expensive even on sale.

For some reason places wont take memory foam mattresses. I tried donating mine. Nobody would take it.

I git a nectar recently. I give it a meh. Firmer than id like but it’s not terrible.

Scott Pruitt recommends you get one from Trump Hotel.

We have the predecessor to this. It’s ready to be replaced now, but it has lasted a long time and was supremely comfortable the first decade or so we owned it.

Get all the comfort and support you need with our Orthopedic Super Pillow Top Mattress, available in a variety of sizes. Buy yours today.

It’s a two sided pillow top that is rated for maximum support and durability. I think it’s because of the size / quality of the springs. As Lzeroki has said before almost no one makes a mattress like this anymore. I’d buy one while you still can. Or at least try it in a store.

@Agent49, you have heard me say before that we have a Capser, but it is in a guest room and I have never slept on it. Mrs Nugget has and she thinks it is too firm. I would probably like that. I keep meaning to try a night in there to see, but I never think about it.

We have a 9 year old Serta memory foam in our room and it has been great, but I think it is coming to the end of its time with us. When we replace it I think we will get a Leesa. It is supposed to be a little less firm than the Casper. I think we can get 3 Leesas today for what we paid for the Serta 9 years ago. These online companies have changed the industry so much, and I love that. Buying mattresses is worse then buying cars, and I haven’t negotiated with a dealer in the last 7 cars I have bought. Don’t foresee ever going back into a mattress store again.

Put me down as a fan of Original Mattress Company.

I guess the link would have been helpful:

Put me down as a fan of Original Mattress Company.

Thanks for all the comments so far fellas. 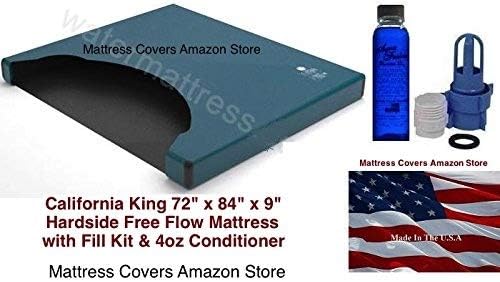 I absolutely LOVED my waterbed back in the highschool days…and so did the ladies!!!

We bought a Lull matress about 8 months ago. It is pretty good, but I don’t expect to get more than 5 years out of it.